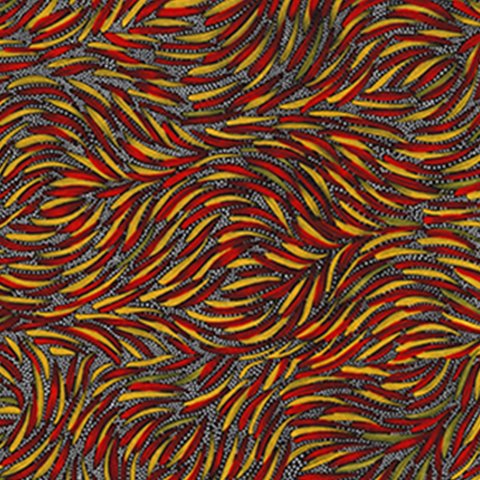 Rosemary was born at Utopia (Boundary Bore) in the Northern Territory in 1945. She belongs to the Anmatyerre language group. She learnt to paint with acrylic paints during the summer project sponsored by Central Australian Aboriginal Media Association in 1988-89. Since then she has been a very prolific and brilliant artist. Her paintings are held in many galleries and private collections, both in Australia and overseas. She belongs to the same family of eminent artists as Gloria Petyarre, Kathleen Petyarre and the late Margaret Petyarre. In this work Rosemary depicts the leaves of the pencil yam plant and its seeds, which were once an important food source for the Anmatyerre people of Utopia in Central Australia. There are many Dreaming rituals attached to this plant and homage is paid by the women in their awelye ceremonies. Rosemary has used a combination of white dots to represent seeds and coloured leaves with flowing movement to beautifully depict the leaves of the bush yam moving in the gentle desert breeze